In its 40 Years, NIB has Fueled National Growth 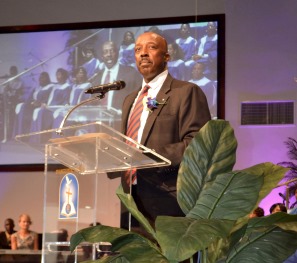 NASSAU, The Bahamas – In his address of the National Insurance Board’s 40th Anniversary Church Service at Evangelistic Temple on Sunday, Minister of Labour, National Insurance and the Public Service, the Hon. Shane Gibson illustrated the significant role NIB has played in the overall growth and development of The Bahamas.

Acknowledging the significant milestone of 40 years, Minister Gibson said: “We pause to reflect on and access the National Insurance Board as an Institution, as a movement, and as a foundation pillar of our modern Bahamas.”

NIB was created to administer the country’s social security programe, and first opened its doors on October 7, 1974.   Minister Gibson outlined its history and development since then, noting that Prime Minister the Rt. Hon. Perry Christie, also present at the service, was the third Minister of National Insurance, and among the first Ministers appointed to National Insurance during the period of 1977 to 1982, just three years after the program was introduced.

Mr. Gibson stated: “In the historical context of The Bahamas, this was the immediate post Independence period when expectations in the social, economic and political context were very high.  It was a time when the Government of the Bahamas had to be seen to be delivering on the promises and aspirations that drove the movement to Independence.

“But as history has proven, time and again, political freedom gained from a struggle is not an end in itself, but rather a means to an end.  In The Bahamas, we dreamt of and aspired to education for all of our people, access to basic healthcare, non-discrimination in employment opportunities, and social mechanisms that would allow and give us some measure of dignity when things become rough, and a normal means to earn an income uninterrupted.”

Minister Gibson said that to its credit, the Bahamas Government had seen the need for a comprehensive system of social security, and a small group of persons in The Bahamas was charged with developing a social security scheme that would provide some acceptable form of income replacement for workers of the country, and their dependents, from the cradle to the grave.

“And this work was completed with the passage of the National Insurance legislation in 1972.  I think the point of then and now would best illustrate the phenomenal growth of the scheme.  At the start of the various programs under the National Insurance, short-term benefits were paid at a maximum rate of $54 per week, long-term benefits were paid at a rate of $26 per month, and funeral benefits, one-time payment, was $200,” said Minister Gibson.

“Old age, non-contributory pension, which was paid when insufficient or no contributions had been made, was $26 per month.  At the end of its first three years, National Insurance had collected some $58 Million in contributions; had paid out over $6 Million, as Benefits assistance; and had a reserve fund of some $52 Million.

Minister Gibson said that no one at the time could imagine how significant NIB would grow to become over the years.

“Today, in contrast to its humble, but ambitious beginnings, NIB at the end of its last financial year 2013 had accumulated reserves of some $1.6 billion.  Its contribution income for the same year was reported at $229 million.  While its benefits expenditure for 2013 was some $222 million,” said Minister Gibson.

“It also realized an investment of some $86.3 million during the period.  Additionally, maximum monthly long-term benefits and weekly short-term benefits payments have increased on average of 63-fold and seven-fold respectively, since 1972.”

For its achievements, Minister Gibson congratulated the employees of NIB, “in particular those long serving employees who would have made a significant contribution over the years.  And even though persons may say they were well rewarded, I can tell you they have made many sacrifices in making sure that you get the quality service that you do get from NIB.  And so we thank them and we congratulate them.”

Minister Gibson then introduced Prime Minister Christie as one of the most socially conscious Prime Ministers in the Commonwealth of The Bahamas over the last 40 years, who has been there from the beginning and like NIB, is also celebrating 40 years serving the Bahamian people.