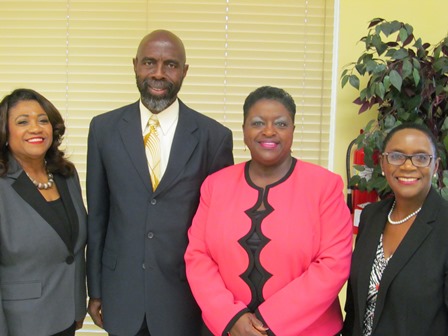 NASSAU, The Bahamas – The observance of the 54th anniversary of the Women’s Suffrage Movement that led to the enfranchisement of Bahamian women on November 26, 1962, will be at the forefront of the 2016 celebrations of National Women’s Week in The Bahamas, along with the observance of International Day to End Violence Against Women – a United Nations initiative.

An exhibition on the Women’s Suffrage Movement in The Bahamas will be on display in Parliament Square throughout the week, November 20-26.

Minister of Social Services and Community Development, the Hon, Melanie Sharon Griffin said while National Women’s Week allows women throughout the Commonwealth to “celebrate the many instances of progress women have attained in The Bahamas,” it also reminds them that there is still work to be done for the advancement of women in this country.

“The rights realized by women through voting equally with men was only the beginning of the journey towards a more equitable Bahamas,” Mrs. Griffin said, in a press conference November 14 at the Ministry.  “The importance of the active engagement of every woman, man, boy and girl cannot be underestimated as we collectively heal and grow this nation. This approach is consistent with the United Nations Sustainable Development Goals, which emphasize the critical role of inclusion and partnership in the development process.

“While these goals are framed in a global context, emphasizing relations between and among States, they also reflect the importance of stronger partnerships at the national level.  [This] sense of shared responsibility is crucial to the integrated, socio-economic development of The Bahamas,” Mrs. Griffin added.

The celebrations surrounding National Women’s Week will be held under the theme: “Promoting Women as Equal Partners with Men in National Development” and will include events such as an interactive dialogue on the theme on Monday, November 21, at the Performing Arts Centre, University of The Bahamas from 6-8pm.

Other activities will include a ‘Say No to Violence Against Women’ Forum hosted by the Zonta Club at 10am, Thursday, November 24 at the School of Nursing Auditorium, Grosvenor Close. The Forum will be followed by an orange ribbon-tying initiative on Bay Street. A ‘Women in the Arts – An Evening of Cultural Performances’ extravaganza has also been planned for Friday, November 25 from 6-8pm at the National Art Gallery of The Bahamas, West Hill Street.

International Day to End Violence Against Women will be observed on Friday, November 25. The Department of Gender and Family Affairs has launched an “Orange Your Office” competition for which prizes will be awarded to bring greater awareness to this issue.

The period from November 25 (International Day for the Elimination of Violence Against Women) to December 10 (Human Rights Day), comprises 16 Days of Activism against Gender-Based Violence Campaign -- a time that is used to galvanize action to end violence against women and girls around the world.

The Department (formerly the Bureau of Women’s Affairs) will also host a National Women’s Day March/Fun Walk and Celebration beginning at 8am at the University of The Bahamas on Saturday, November 26 to highlight the Women’s Suffrage Movement and “to celebrate future women leaders.”

The activities kicked off Monday (November 14) with a Conversation With Partners Forum at which officials from the Department of Gender and Family Affairs got a further opportunity to dialogue with key stakeholders, including non-governmental organizations.