Tourism is the mainstay of the Bahamian economy, contributing nearly 40% to the country’s total gross domestic product.  It is estimated that just over US$2 billion is spent annually by 4.5 million visitors.  Based on its growing capacity to create jobs, earn foreign exchange and generate income, tourism is expected to remain the dominant industry of The Bahamas for the foreseeable future.

Tourism counts in The Bahamas.  It is the engine of our economy, the chief employer and principal foreign currency earner.   In 2010 The Bahamas welcomed some 5 million visitors including some 3.2 million cruise passengers.
Our principal tourism destinations are located on Nassau/Paradise Island, and Freeport/Grand Bahama Island.  Other important resort developments exist on Abaco, Exuma and Eleuthera.

Smaller, environmentally sensitive hotels, bed and breakfast inns and bone-fishing lodges, that take account of the need to protect and conserve a fragile ecology, exist on virtually every populated island in our chain of islands and cays. These pristine islands provide excellent investment environments for upscale boutique resorts and nature themed retreats for discerning travelers. New Providence, Abaco, Andros, Exuma, Grand Bahama and Inagua are home to National Land and Marine Parks each host to a rich diversity of plant, animal and marine life.

A vibrant second home market exists throughout our islands presenting other opportunities for investment in upscale single family and/or condominium developments. Second home and vacation home owners in The Bahamas are eligible to receive a Home-Owners card which affords them easy multiple entries to the country with a minimum of formalities at the border.
Especially popular with second home owners are Grand Bahama, Abaco, Eleuthera, Harbour Island, Exuma and Long Island as well as New Providence, site of our capital city Nassau and home to the wealthy second home enclaves of the world’s rich and famous at Lyford Cay in south western New Providence and the Ocean Club, on Paradise Island.
A new high-end mixed resort and residential golf community is nearing completion at Albany in southwest New Providence.

A multi-pronged programme to improve the infrastructure of the Islands of The Bahamas is underway.  In New Providence improvements to Nassau Harbour, the expansion and upgrade of the Lynden Pindling International Airport and a major roadway and public utility upgrade in New Providence including the development of new recreational parks is meant to improve the general environment for residents and visitors alike. Significant upgrades are also underway or scheduled for airports, docks, roadways and utility services around the Family Islands.

The proximity of The Bahamas to the eastern United States and Canada accounts for the fact that more than 85% of all visitors to The Bahamas originate in North America. The Bahamas also welcomes significant numbers of tourists from Western Europe, South America, Japan and South Africa.

Citizens from the following countries do not require visas to visit The Bahamas for period of three months or less: United States of America, Canada, Mexico, member states of the Caribbean Community, all Central and South American states, most member states of the European Union, Japan, Russia, South Korea, Israel, and most Commonwealth countries including South Africa, Australia, and New Zealand. A full listing of visa requirements is available at Bahamas Consular and Tourism offices around the world.

The Bahamas is one of the world’s most visited cruise destinations.  Thirty percent of all cruise visitors to the Caribbean region visit The Bahamas.  In 2009 Nassau Harbour was deepened to accommodate calls by the newest and largest Genesis Class cruise ships. Cruise passengers calling at Nassau disembark in the heart of the City at Prince George Dock.  The wharf area is home to an authentic Bahamian Craft and Straw Market ensconced in the Welcome Centre and to an open air Hair Braiders Pavilion. 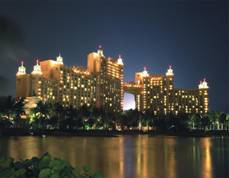 A new Straw Market is under construction at the western end of Bay Street, a replacement for the historic Market destroyed by fire in 2001.  The new market is scheduled for completion in April, 2011.  In addition to Nassau, cruise ships call at Freeport, Grand Bahama and at five private island ports of call in the Family Islands: Disney Cruise Lines at Castaway Cay in the Abacos, Royal Caribbean Cruise Lines at Coco Cay, Norwegian Cruise Lines at Great Sturrup Cay in the Berry Islands, Princess Cruise Lines at Princess Cays in Eleuthera and Holland America Cruise Lines at Half Moon Cay near Cat Island.

Hotel Operations In The Bahamas

The Bahamas is home to the world famous Atlantis Resort and Casino developed and operated by Kerzner International, a British and South African investor group.  Kerzner International also operates the exclusive One and Only Resort, the Ocean Club, a 150 room luxurious resort snuggled at the eastern end of Paradise Island in close proximity to the Clubs’ PGA designed 18 hole Troon golf course, the Cove Hotel, a five star adult oriented resort, the Reef Residences at Atlantis and the Harbour Side Residences a Time Share Resort at Atlantis. 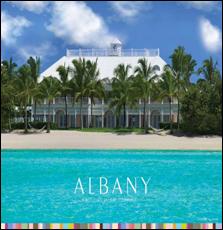 Sandals and Super Club-Breezes, each operate all-inclusive resort hotels in Cable Beach on New Providence. The Baha Mar Group operates two hotels (Sheraton and Wyndham) and a casino along the Cable Beach strip.  Baha Mar proposes to develop a new multi-hotel resort destination at Cable Beach which promises to transform the Cable Beach Resort area.
Other major hotel chains operating in The Bahamas include the Hilton Hotels, Marriot Residences, and Riu Hotels in Nassau/Paradise Island; the Ritz Carlton in Abaco, the Sheraton and the Our Lucaya in Grand Bahama, Sandals in Exuma and Club Mediterranee, operators of a premier vacation resort at the Columbus Isles Village on San Salvador Island.

The Bahamas has no personal, capital gains, estate gift or inheritance taxes.  There is also no corporate tax unless revenue is derived from within The Bahamas. Having regard to and structured upon the accepted international standards of transparency and tax information exchange, the Government has brought into force the International Tax Cooperation Act, 2010, and concluded in excess of twenty tax information exchange agreements with our major international business and financial partners.

This incentive legislation provides for duty free entry of approved construction materials, furnishings and fixtures for hotel development as well as provides for exemption/concession from real property taxes for the first twenty years of operation of a hotel resort.  Hotels with as few as four guest rooms on a Family Islands and those with a minimum of ten rooms in New Providence qualify for concessions under the Hotels Encouragement Act.

This legislation provides for the licensing and regulation of time share and fractional-ownership properties in The Bahamas.  The Act also provides for customs duty concessions on imports used in the construction of such resort properties.