CRICKET IN THE BAHAMAS 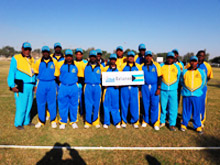 Cricket has been played in The Bahamas from as far back as 1846. Apart from Horse Racing, which began in 1796, it is the oldest sport being played in the country today. The Bahamas Cricket Association was formed in 1936 as an organized body. During the 1940’s and up to the 1970’s, cricket was played by just about everyone on the island in the roads, play grounds, and of course the cricket fields. We were not a part of the West Indies Board, and had it not been for that fact, a number of our players would perhaps have been selected for the West Indies Team. The matches, which were played at Windsor Park, St. Bernard’s Park and Haynes Oval, were so well attended that late arrival caused spectators to have great difficulty in viewing them..

The late 70’s saw the beginning of cricket’s decline in the country. This was due to a number of factors. Physical Education (P.E.) Teachers were recruited from England and they had a vast knowledge of cricket that was imparted on the youth. However, the Government stopped sourcing them from England, and instead hired Bahamians who were trained in the United States. The Bahamian P.E. Teachers had no knowledge of the game and instead taught track & field, baseball, and softball, along with other sports. Additionally, scholarships abroad for other sports lured the youth away from cricket.

Despite this decline, The Bahamas has been involved in a number of cricket competitions. In 2001, The Bahamas was invited to compete in the International Cricket Council’s (ICC) Americas Regional Tournament in Jamaica, where we placed second. The Bahamas had been a member of the ICC since 1987.  This success in the tournament was the catalyst that was needed to regenerate the game in The Bahamas. Subsequent to that tournament, we went on to compete in an ICC Tournament in Panama, where we placed first, and the ICC Americas Associate Tournament in Argentina. We also had a chance to qualify for the 2007 Cricket World Cup by competing against the Associate members in Bermuda in 2004, but we fell short. ICC created a World league in 2006, which we tried out for, but came second behind Argentina, who is an Associate Country. However, all was not lost, as The Bahamas is ranked number one in the Americas Region Affiliates rankings. We are presently ranked 40th out of 95 countries that make up Associates and Affiliates. Fate was on our side as ICC created yet another division in the World league, and we were placed in that division based on The Bahamas being the number one Affiliate in the Americas. Our division included Botswana, United States, Afghanistan, East Asia, Norway, Nepal, Singapore, Jersey, Mozambique, East Asia 2 and Germany.

In 2006 the Association took a bold step in hiring an international cricket coach from England to introduce the game in the schools. We had no income to pay the coach but instead we solicited funds for the same. The coach was able to make contact with 26 primary schools in Nassau and introduced what is known as Kwik Cricket to the young boys and girls. They loved it! Out of that program he was able to start an under 15 and under 13 league, having four teams each, with the under 15’s playing with hardball. An under 19 squad was also put together, and competed in the ICC Americas under 19 Tournament in Canada from August 11th to 19th, 2007- a historical day for the Bahamas! The Bahamas Junior National Team competed in The ICC Americas Central Division Under 15 Tournament in The Bahamas in 2009, and emerged victorious. We presently have Senior, Under 19 and Under 15 National Teams. The Bahamas participated in the Pepsi ICC Cricket World League Division 8 in Kuwait in 2010.

Cricket is played on Saturdays and Sundays at Windsor Park and Haynes Oval.