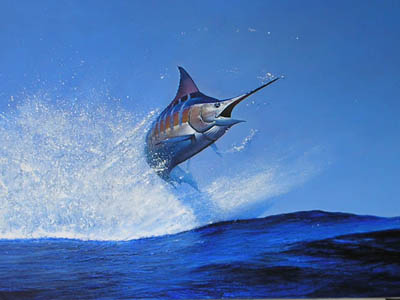 The blue marlin (Makaira nigricans) is the majestic fish that is found in both the Atlantic and Pacific Oceans, with reports of the largest sizes found in the latter. However, many persons first encounter the fish in Ernest Hemingway’s book “Old Man and the Sea.” Mr. Hemingway was a frequent visitor to The Bahamas, especially the island of Bimini, where the blue marlin is highly prized among the strong game-fishing community.

The marlin’s back is cobalt blue and its flanks and underbelly are silvery white. There may be light-blue or lavender vertical stripes on the sides as well.

A powerful and aggressive fighter, the blue marlin can run hard and long, sound or dive deep, and leap high into the air in a display of strength.