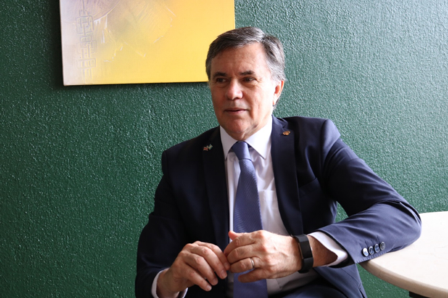 San Jose, 10 April 2018 (IICA). The Director General of the Inter-American Institute for Cooperation of Agriculture (IICA), Manuel Otero, will participate in the meeting of the Central American Agricultural Council (CAC) of the Central American Integration System (SICA) in Punta Cana, Dominican Republic. Otero will share information on the renewal process he is currently leading as the head of IICA, an organization that promotes agricultural development in the Americas.

“We are introducing the ministers of agriculture to our renewed technical cooperation model, which reinforces IICA’s commitment to its Member States by reducing centralization and bureaucratization, boosting participation in regional integration mechanisms, and closely examining the problems that limit development,” stated Otero.

The Director General of IICA added that the main objectives of the renewed model are to foster local governance, safety for rural families, environmental sustainability, support for youth and women in rural communities, and the development of the rural production sector.

Otero also referred to one of the first actions of his administration: the signing of a political and programmatic declaration with Vinicio Cerezo, Secretary General of SICA, with whom he met in Punta Cana to continue furthering the progress of this important strategic partnership.

At the meeting during which CAC will approve its 2018 Work Plan, Otero will underscore the need to consolidate IICA as an institution that “serves as a bridge between countries and institutions, in order to foster greater and more efficient cooperation, particularly within the framework of projects aimed at fostering and developing family farming, extension services, agricultural insurance, and water management.”

Otero will also offer his resolute support for the design of a new Central American agricultural policy; efforts to address sensitive issues such as the Central American Dry Corridor, which impacts close to 30% of the population; and the provision of assistance to the Northern Triangle countries (Guatemala, El Salvador and Honduras), where pockets of violence and exclusion abound and perfected strategies for rural development are necessary.

At a subsequent activity to be held in Santo Domingo, Otero will meet with Isidoro Santana, Minister of Economy, Planning and Development of the Dominican Republic; Miguel Vargas, the country’s Minister of Foreign Affairs; and diplomatic representatives of the European Union, the United States and Argentina.

The Director General of IICA will also engage in dialogue with the Agribusiness Board, a body comprising the former ministers of agriculture of the Dominican Republic.

“This visit represents a meeting with the Dominican Republic’s institutional framework and leadership, with the aim of addressing matters such as the 2030 national development strategy as well as identifying the Dominican Republic’s new demands. It is also a firm step toward building a solid relationship focused on providing technical assistance and identifying opportunities to expand public and private development capacities,” stated Otero.

This year, the Dominican Republic will celebrate 50 years as a member country of the Inter-American Institute for Cooperation on Agriculture.

The Inter-American Institute for Cooperation on Agriculture  (IICA) is also being represented in The Bahamas and Caribbean.