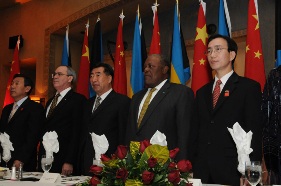 Nassau, Bahamas--Prime Minister the Rt. Hon. Hubert Ingraham, standing, brings greetings on behalf of the Government and the People of The Bahamas at a State Dinner in honour of His Excellency Hui Liangyu, Vice Premier of the State Council of The People's Republic of China, seated left, on Tuesday, February 17, 2009. The State Dinner was held at the Atlantis Resort, Paradise Island. (BIS Photo/Peter Ramsay)

It is my special pleasure to welcome the Vice Premier of the State Council of the People’s Republic of China, H.E. Mr. Hui Liangyn, and his delegation to The Bahamas.

Excellency, you come from the oldest continuous civilization in the world to a small developing country which achieved political maturity less than 40 years ago.

We in The Bahamas, much like people around the globe, watched with the greatest interest and admiration, the hosting of the Olympiad in Beijing last summer.

To say that the cultural presentations were impressive would be an understatement. China set a whole new standard that others will be hard pressed to meet.

You have much to share with the rest of the world and so we are pleased that your Government is expanding and deepening its relationship with the countries of the Caribbean.

We were especially pleased that just last October China became the 22nd donor member of the Inter-American Development Bank.

Already, significant funding has flowed to the IDB’s soft loan window for the poorest countries in our hemisphere but also to the Inter-American Investment Corporation (IIC) and to the Multilateral Investment Fund (MIF).

And we welcome China’s support of international efforts to combat piracy in the Gulf of Aden. Threats to shipping and trade are particularly worrisome to all maritime countries and as the third largest Maritime Registry, The Bahamas is especially concerned about such threats; curtailment of these acts of piracy and, to the extent possible, their elimination, is in all our interest.

Today, 12 years after the establishment of diplomatic relations between the Government of the People’s Republic of China and the Commonwealth of The Bahamas, we enjoy a wide spectrum of relations – in commerce, education and training, and culture.

Earlier today, Excellency, you participated in the signing of a number of bilateral agreements between our two countries: one abolishing the requirement for diplomats from our respective countries to obtain visitors’ visas to facilitate entry into each of our countries; another providing the framework for cooperation in agriculture; a third creating a framework for economic and technical cooperation under the provisions of which some seventy million RMB is being made available in funding for projects in The Bahamas; and a fourth agreement between The Bahamas and the Export and Import Bank of China which will finance the construction of a modern highway leading from the Lynden Pindling International Airport to the College of The Bahamas campus in Oakes Field.

Excellency, you will be aware that a number of Bahamians have taken up educational pursuits in China and I am pleased to learn of the growing number of our people studying and becoming conversant in Mandarin. You may also be interested to know that Mandarin is being taught at our College of The Bahamas, soon to be our national university.

Our history and culture are of a far newer vintage than the culture and history of your ancient country. Nevertheless, we place great value on the fact that it was on a Bahamian beach that the great drama of the New World began, with all its tragedies and triumphs.

We are becoming more and more conscious of that heritage and we are determined to conserve and to expose to the world some of the sites and artifacts associated with it.

Excellency, I am especially pleased that notwithstanding the brevity of this stay, you will have the opportunity to visit our second city, Freeport, tomorrow and to see first-hand the impact of Chinese investment in our country at the Grand Bahama Container Transshipment Port and at the Our Lucaya Resort Development.

The decision of the Chinese private sector to invest in our country, and specifically in Grand Bahama, is welcomed by the Government and people of The Bahamas and we look forward to continued mutually beneficial relations in the years ahead.

May I now invite you to stand with me for a toast:

To the President and People of the People’s Republic of China; and