PUERTO RICO – Proper coordination is key to delivering an effective disaster recovery response to a storm of the magnitude of Hurricane Dorian, according to Katherine Forbes-Smith, Managing Director of the Bahamas Disaster Reconstruction Authority.

Mrs. Forbes-Smith was a panelist on February 18 and 19 at the Clinton Foundation’s CGI Action Network on Post-Disaster Recovery in San Juan, Puerto Rico.

“If you don’t have any coordination going on, particularly when you have a lot of NGOs offering services in the country, if you cannot coordinate those services and align it with the priories of the Government, we’re not helping anybody,” she said on the February 18 panel, which was moderated former President Bill Clinton.

Hurricane Dorian was the strongest storm to hit The Bahamas. It is also the country’s worst natural disaster.

Dorian is estimated to have caused $3.4 billion in losses and damage in The Bahamas.

Parliament created the Bahamas Disaster Reconstruction Authority for the management of reconstruction and restoration in disaster zones.

“Thank you for saying that a big part of your job is coordination because in every major disaster I’ve ever been in, trying to help well-meaning people actually be helpful requires coordination,” he said.

The Disaster Reconstruction Authority came into effect in December 2019, and has organised the response of the Government’s various agencies and coordinated with local and international NGOs.

In Abaco, for example, the Authority has organised a partnership in Little Abaco with Church By the Sea. The church provides material for home repairs and the government pays for labour.

Mrs. Forbes-Smith said on the February 19 panel that these partnerships are expanding across the disaster zones in Grand Bahama, Abaco and the Abaco Cays.

“And we’re trying to coordinate NGOs to work in certain sections of the islands to make sure that everybody is not tripping over everybody else but everything is coordinated,” she said.

The Authority on February 10 also launched its Small Home Repair Programme to assist Bahamians. Qualifying homeowners in the disaster zones could receive up to $10,000 in purchase orders to assist with repairs.

Hurricane Dorian destroyed much of the electrical infrastructure in east Grand Bahama and central Abaco. The electricity companies on both islands are working on restoration.

Mrs. Forbes-Smith said that a donation of about 750 solar street lights will be in the country in a matter of days to assist with illuminating those areas. The lights are from Food for the Poor and Mission Resolve Foundation.

In response, the Clinton Foundation launched the CGI Action Network on Post-Disaster Recovery. Building on CGI’s proven Commitment to Action model, this Action Network has brought together over 750 organizations from across sectors and announced over 85 new, specific and measurable plans that advance recovery and promote long-term resiliency across the region. 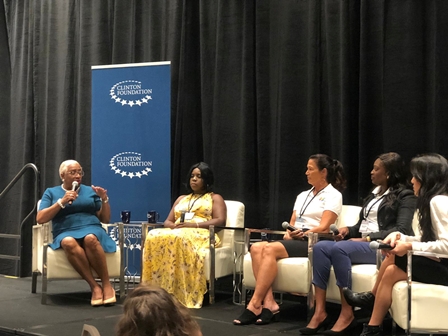 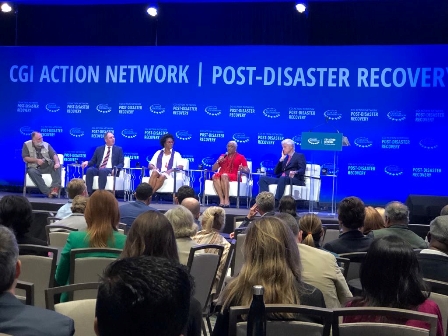