FREEPORT, Grand Bahama – The Central Bank of The Bahamas is soon introduce a pilot digital currency for The Bahamas, Deputy Prime Minister and Minister of Finance, the Hon. K. Peter Turnquest announced on Wednesday, June 20, during the Prime Minister’s Luncheon at the Bahamas Blockchain and Cryptocurrency Conference.

Officially opened by Prime Minister, Dr. the Hon. Hubert Minnis on Wednesday morning at the Grand Lucayan, the luncheon hosted sponsors, presenters and special guests to hear from the Deputy Prime Minister.

Stating he hopes Grand Bahama becomes the digital paradise of the region, the Deputy Prime Minister said, “The production of a modern fully digital payment service is the way forward for this era of governance. A digital Bahamian currency is especially important for the many Family Islands as they have seen many commercial banks downsize and pull out of their communities, leaving them without banking services. As an island nation, where transportation can be an inconvenience for many, especially the elderly, and costly, we must offer financial services digitally and securely.

He added that it is hoped that in the near future the government will be introduce a pilot programme using blockchain certifications for people who complete studies at the National Training Agency. It is expected that these individuals maintain and share their certification information.

“Even though it is at a very preliminary form, the government is looking to see other ways in which certificates such as business licenses, passports, national insurance can make use of blockchain technology to enable persons to maintain their data and share it in a secure and verifiable way.”

When coming to government just over one year ago, the Deputy Prime Minister said he wanted the country to have use a blockchain type of technology so as to be more efficient and root out corruption in the government system.

“Using technology and single points of contact we’re able to eliminate a lot of the human element that facilitates corruption, and so when we talk about applying for government services, if we have a single portal for entry and all of the processing being done behind the scenes, either through electronic data interchange or through human facilitation we can eliminate that point where, we Bahamians call it, you have to tip somebody in order to get service.”

This system will not only be more efficient, but reduce the cost of doing business in The Bahamas.

The conference will ends on Friday, June 22. 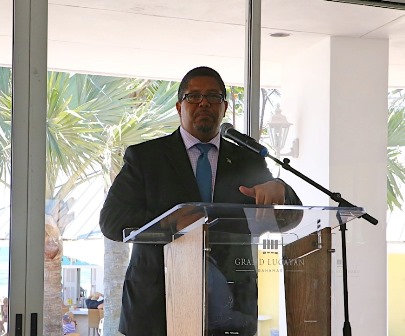