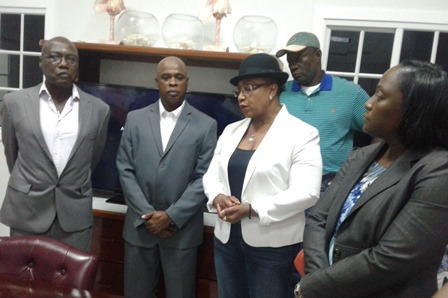 NORTH ANDROS, The Bahamas – A delegation of diplomats and senior government officials visited North Andros on Wednesday to see first hand the impact of Hurricane Matthew. Parliamentary Secretary in the Ministry of Foreign Affairs and Immigration, the Hon. Cleola Hamilton, led the delegation. The Diplomats’ visit to Andros was part of a schedule of activities held during the third annual diplomatic week 2016.

During a press conference held at the North Andros airport, Mrs. Hamilton expressed her ‘sorrow’ about the hurricane and encouraged Androsians to remain ‘positive’ and to continue to work together.

“This is not the end of Andros. This is an opportunity to bring the community together in a collaborative effort to rebuild the island,” she said. “I ask the members of the Diplomatic Corps to keep Androsians and Bahamians in general in your prayers.”

The Diplomats toured the settlement of Lowe Sound and also the campus of the Bahamas Agriculture and Marine Science Institute (BAMSI).

North Andros and Berry Islands Administrator, Ivan Ferguson said that currently the community of Lowe Sound, which was severely impacted by the hurricane, was in transition. He said Hurricane Matthew, which was deemed the most devastating storm in recorded history for the island, impacted over 84 families, representing some 300 persons. He said that out of the six shelters on the islands, five of them were activated.

Currently, according to representative of the National Emergency Management Agency (NEMA), Mr. Dames, the community of Lowe Sound is in the Relief, Recovery and Reconstruction Phase of the Hurricane. Relief in the form of food and water is currently being distributed in the community. A plea was also made to the visiting Diplomats to solicit any form of assistance that they could garner from Bahamian diaspora abroad and international agencies in the countries where they are located.

Several diplomats pledged to embark on seeking assistance when they return to their respective posts to assist with recovery efforts for the islands devastated by Hurricane Matthew.