Nassau, Bahamas -- The Government continues to monitor the oil spill at Equinor, South Riding Point Oil storage facility on Grand Bahama. The National Oil Spill Contingency Advisory Committee, consisting of a cross-section of industry stakeholders, has been appointed to address the issue. To date, the committee has met on several occasions and key persons have visited the oil spill site to assess the scope of the spill.

Following the most recent site visit, it was revealed that the oil spill made incursions of the facility’s berm and spread inland up to seven miles into coppice environments north of the facility. It was also determined that what may have been initially reported as an oil slick in the ocean was actually seaweed. It was also confirmed that there was no immediate threat to human health and safety, however, a wildlife plan has been submitted for review by the Ministry of Agriculture and Marine Resources in concert with the BEST Commission.

An assessment conducted by the Department of Environmental Health has confirmed that the product that was spill was Dopa crude oil. The Equinor facility has a storage capacity for 6.5 million barrels of oil. During the passage of hurricane Dorian last month, 1.8 million gallons were contained at the facility. Of the 10 crude oil tanks present at the facility, three of them contained product. The product came from the top of tanks #6 and #10. Experts suspect tornadic activity propelled the oil spill in a northerly direction, which pose no real threat to the marine environment.

Equinor’s initial response to the spill included: deployment of containment and personnel via helo; acquisition of oil spill resources from Louisiana (USA); assessment of storage terminal damage; investigation to determine the integrity of oil storage tanks; oil removal with the facility’s berm; aerial reconnaissance to determine the scope of pollution and development of an oil response strategy and tactics ahead of arrival of containment and remedial resources from Louisiana including equipment and supplies.

The Committee has planned another site visit to Grand Bahama this week to further its assessments. 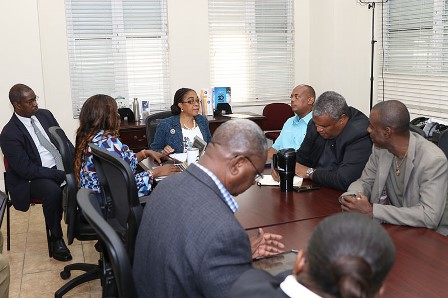