FREEPORT, The Bahamas - Thirty-two long-serving public officers in the Northern Region will be honored during the 17th annual Public Service Celebrations & Recognition of retirees from January 29 through February 4, 2017.

Under the theme, “The Public Service: In Pursuit of Productivity and Accountability” events to commemorate the 17th anniversary were announced during a press conference at the Ministry of the Public Service on Tuesday morning, January 24.

Laurie Bullard, Chairperson for the Celebration Committee said that this year’s honorees hail from a number of government departments. There will be seventeen honorees from the Department of Education, eight from the Royal Bahamas Police Force, two from Customs, two from Immigration, one from Local Government, one from the Passport Office and one from the Ministry of Works.

“The celebrations will commence with a service of Thanksgiving at 11 a.m. on Sunday, January 29, 2017 at First Baptist Church, Columbus Drive and Nansen Avenue,” Ms. Bullard pointed out. “All honorees, their guests, public officers and well-wishers are invited to worship with us.

“The Northern Region of the Public Service Celebrations Committee, along with our honorees and representatives from the mentioned departments will host Morning Devotions on ZNS radio during the week of February 6-11, 2017.”

The main event for the week is expected to be the Appreciation Luncheon, during which time all honorees will be given special gifts and tokens of appreciation. The luncheon will be held at the Grand Lucayan Resort on Thursday, February 2, at 12:30 p.m. under the distinguished patronage of the Hon. D. Shane Gibson, Minister of Labor and National Insurance and Minister in charge of the Public Service.

Ms. Bullard noted that the Public Service conducted a toy drive in November of last year: on Saturday, February 4, 2017, those toys will be distributed to children within the community, particularly to those families who were adversely affected by Hurricane Matthew in October of last year.

“Public officers, honorees, family, friends you are invited to participate in these events as we celebrate the public service, in pursuit of productivity and accountability,” added Ms. Bullard.  “Further details regarding any of these events may be obtained by contacting the Ministry of the Public Service in the National Insurance building.” 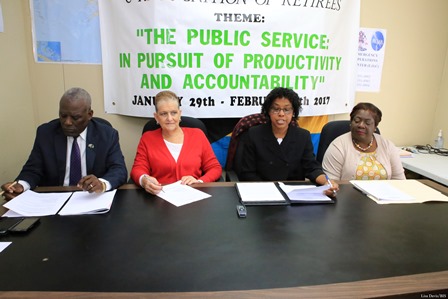