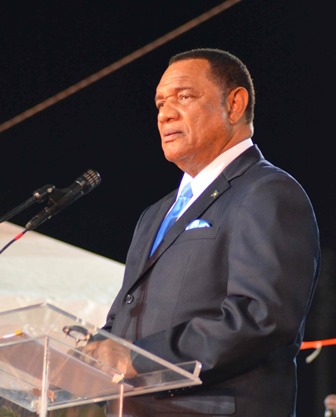 NASSAU, The Bahamas – At the State-Recognized Memorial Service for Dr. Myles and Pastor Ruth Munroe at the Thomas A. Robinson National Stadium, December 3, Prime Minister the Rt. Hon. Perry Christie said Dr. Myles and Pastor Ruth Munroe’s true monument is represented in the two wonderful children they produced, and in many of the leading men and women of our society who were shaped by their teachings and personal example.

Before a large stadium crowd, and as part of a comprehensive programme of speakers and cultural expression -- the Prime Minister observed that we hear too little of those are doing good things “even great things, day in day out, working by the sweat of their brow; raising good families; helping out and doing good works in the community; leading lives of high purpose that ennoble themselves and ennoble us as all as a society, as a people, and as a nation under God. That’s the kind of people Dr. Myles leaves behind as his monument.”

During his condolences, the Prime Minister discussed his last meeting with Dr. Munroe and his last conversation, noting in retrospect it seemed there was a lot on his mind, “much more than normal” and that he had a sense of urgency that “the challenges of our time summoned us all to leadership in one form or another so that the problems of contemporary Bahamian society that so troubled him could be more aggressively addressed and remediated.”

He said: “I don’t have to tell you that Dr. Munroe really loved his country, this beloved Commonwealth of The Bahamas. Yes, he would go forth into the world, crisscrossing continents, flying across the great oceans of the planet but he would always come back home to play his part, a leading part, in helping to build up his country,” said Prime Minister Christie.

“This kind of outreach was central to his sense of purpose and central to his work as an evangelist for Christ because it was clear to me that religion for Myles Munroe was not about locking oneself up in some remote ivory tower of private contemplation. Rather, it was about rolling up your sleeves and getting down into the trenches to deal with the real problems of real people living in the real world.”

Prime Minister Christie said while Dr. Myles Munroe was unquestionably a globalist, an internationalist, in the scope of his Christian ministry and in the reach of his teachings and travels, he was, at the same time, a profoundly committed nationalist; a Bain Town-bred Bahamian through and through; a man who never forgot his roots; a man who was passionately involved in Bahamian nation-building and who played an important part in that process over the course of more than three decades.

“And so my brothers and sisters, as Prime Minister of the Commonwealth of The Bahamas, I therefore stand at attention today and salute Dr. Myles Egbert Munroe as a Bahamian patriot of the first order. And on behalf of all my compatriots, I offer the thanks of a grateful nation for the life and work, and for the shining example, of this great son of our soil,” said the Prime Minister. 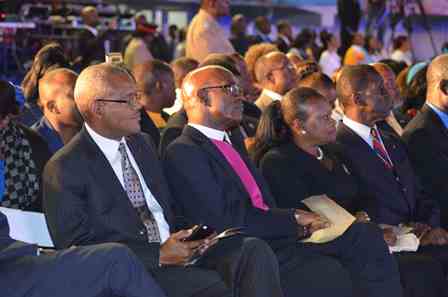