PM Minnis: Today Represents a New Day for The Bahamas

"Today also represents a renewal and reaffirmation of our democratic heritage," Prime Minister Minnis said, during his Swearing-In Ceremony at Government House.  "Exercising a cherished right that is still not universal, the Bahamian people freely elected a new government.

"We will honour this mandate for change."

Prime Minister Minnis thanked Governor General Her Excellency Dame Marguerite Pindling for "most graciously" appointing him as the fourth Prime Minister of an independent Bahamas.  He also thanked her for her gracious hospitality, and that of the "fine staff" of Government House.

"I wish to thank the many people who are here today, including special guests, party colleagues, well-wishers and constituents of Killarney," Prime Minister Minnis said.  "I thank also my wife Patricia, my father Randolph Minnis, family and dear friends for their love and support.

"I remember today all those on whose shoulders I stand, including my mother Rosalie North, and my sister Doris Hall, who though long departed, are forever in my heart," he added.

Prime Minister Minnis said that although The Bahamas is a small country, its democracy is rightly the envy of many countries throughout the world that "mark the manner of our bearing."

"Yesterday’s general election was peaceful and free from violence," he pointed out.  "With civility and nobility, Bahamians from all walks of life joined hands and hearts to forge a new direction for our country.

"Now we are witnessing another orderly transfer of power," he noted.

Prime Minister Minnis said that, with tremendous gratitude, he again thanked the Bahamian people for reposing their trust in his party.

He pledged that his Government would honour that trust with an unwavering commitment to good governance, the rule of law, transparency and accountability.

"We will respect the Constitution; and we will abide by the longstanding and tested conventions of our parliamentary democracy," Prime Minister Minnis said.

He also thanked his colleagues for reposing their confidence in him as Prime Minister.  In turn, he said, he pledged an unwavering commitment to collegiality, collaboration and collective responsibility.

"Ours is an extraordinary system of government," Prime Minister Minnis said.  "I will honor the spirit and traditions of our democratic heritage."

To Her Excellency, the Governor-General, Prime Minister Minnis pledged, on behalf of his colleagues, their commitment to serve with integrity as Her Majesty’s Bahamas Government.  He added that he looked forward to the "most cordial relations" with her office in the service of the nation.

"We commit ourselves to the common good of the Commonwealth of The Bahamas," he said.  "We rely on the blessings of Almighty God, who is the source of all power and grace.

"I thank you and good evening and God bless us all." 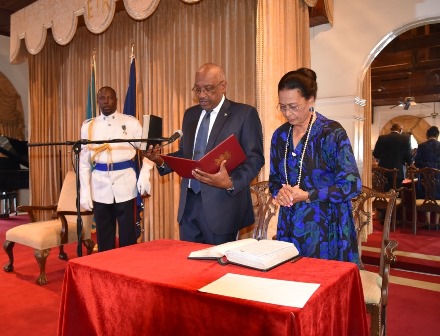