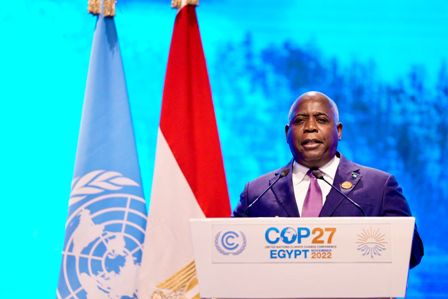 SHARM EL-SHEIK, Egypt -- During his National Statement at the 2022 United Nations Climate Change Conference (COP27) World Leaders Summit, on November 8, 2022, Prime Minister and Minister of Finance the Hon. Philip Davis highlighted reasons to attend the event, including because his country has to believe that “a safer, better future is possible.”

“I say that we have come, because we believe that action -- real, concerted, action -- can save the planet, and save our human race,” Prime Minister Davis said, at the Summit, being held in Sharm El-Sheik, Egypt.  “And I say that we have come, because each nation here, acting in its own, enlightened self-interest, knows, in a most profound way, that we need each other to make this work.”

“I live in the most beautiful country on earth,” he added.  “But right now, even as I speak, Bahamians are mobilizing to prepare for the impact of yet another powerful storm, a Tropical Storm Nicole.

“So I come here with a simple request:  Let's get real.”

Prime Minister Davis pointed out that what was needed most at that conference was to confront “the radical truth.”

“Big, ambitious goals are important - but not if we use aspirations to obscure reality,” he said.  “The goal to limit global warming to 1.5 degrees is on life support.”

“This is a hard truth for many to admit because even the best-case scenarios will mean almost unimaginable upheaval and tragedy,” he added.

Prime Minister Davis stated that the realities of war, economic headwinds, the hangover from the pandemic, and competition among world powers, cannot be used as justification not to confront these imminent dangers.

“Let's get real: it's only going to get worse,” Prime Minister Davis said.  “We are entering a new climate era that will drive extreme geopolitical and economic instability.”

“Statements without binding commitments or enforcement mechanisms have been used again and again as a way to postpone real action,” he added.  “Yes, the world's wealthiest carbon polluters should pay for the very extensive loss and damage caused by their emissions.

“But 'getting real' means understanding that it will be self-interest that drives decision- makers.”

Prime Minister Davis noted that he was not there to ask any of those in attendance to love the people of The Bahamas with the same passion as he does, or even to act on behalf of future generations in their own countries.

“I'm asking: what is it worth to you, to prevent millions of climate refugees, from turning into tens of millions, and then hundreds of millions, putting pressure on borders and security and political systems across the world?” he asked.

He added that he was not telling those in attendance to overhaul the World Bank for that “new climate era” because it was the right thing to do.

“I'm telling you to get smart and act quickly to address the systemic risk of climate change,” Prime Minister Davis said.  “Multilateral banks must play a crucial role in scaling up financing options that will provide real solutions.”

“I'm not here to tell the private sector to give up caring about profits,” he added.  “I'm here to say that in a world of profound instability, your profits are very much in danger.  So, we need to work together to transition the world to clean energy.

Prime Minister Davis pointed out that most Bahamians were descended from people who were forcibly removed from their homes, shackled in the bottom of boats, and shipped across the Atlantic.

“We are the children of the survivors of that man-made tragedy,” he stated.  “We inherit their moral imperative.”

“We have a duty to fight for our survival, as they fought so desperately for theirs,” Prime Minister Davis added.  “So, even as we have urged the world to act, we have not waited.”

Prime Minister Davis pointed out that Bahamians knew that they “have what it takes” to provide the kind of leadership and innovation that contributed to meaningful solutions.

He noted that The Bahamas’ mangroves, seagrasses and salt marshes were a critical carbon sink.

“While others were talking, we took action, and passed innovative new legislation to deal with Blue Carbon,” Prime Minister Davis pointed out.  “We created a regulatory framework for dealing and trading in carbon credits. Other countries are already considering adopting our model.

“And just this past Sunday, we agreed in principle with the IMF, to partner together, among other things, to determine how carbon credits can be used productively, as a new asset class,” he added.  “Yes, this is what real, life-changing action looks like. We in The Bahamas are not sitting still.

“We will not flinch from confronting the hard truth.”

Prime Minister Davis stated that The Bahamas would also continue to offer its leadership, and its drive for innovation and ingenuity.”

“Whoever you are, wherever you are, bring your climate solutions to The Bahamas,” he said.  “Help us convert our front-line vulnerabilities into cutting-edge solutions for all.

“Because we refuse to lose hope,” he added. “We will not give up.

“We have no other choice.”

Prime Minister Davis noted that the alternative compels Bahamians to present themselves at their borders as refugees. 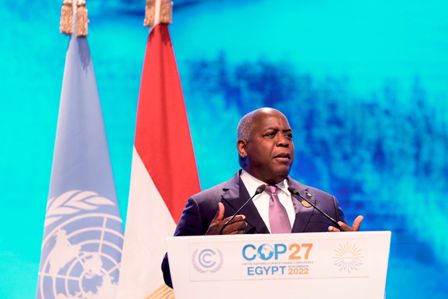