NASSAU, The Bahamas - During The Commonwealth of The Bahamas Investiture of National Honours 2018 Ceremony, Prime Minister Dr. the Hon. Hubert Alexander Minnis was invested with the insignia, The Order of The Nation, in the first of such honours instituted by the country as it observes National Heroes Day.

The Prime Minister will now be addressed as Dr. the Most Honourable Hubert Alexander Minnis, O.N, M.P, in keeping with the National Honours Act 2016.

The Investiture of National Honours 2018 Ceremony was held in the Ballroom at Government House on Monday, October 8, during which Her Excellency, the Most Honourable Dame Marguerite Pindling, Governor-General and Chancellor of the Societies of Honour, invested a range of national honours on more than 30 nation builders.

The Governor-General announced the honourees on Independence Day July 10, 2018, as advised by the Prime Minister on the recommendations of the National Honours Advisory Committee.

She said that the honourees were “worthy of adulation” for their “loyalty to country and contribution to this land of peace.”

Prime Minister, Dr. the Most Honourable Hubert Alexander Minnis, affectionately known as “Doc,” is a medical doctor by profession, a specialist in Obstetrics and Gynaecology and boasts delivery of more than 5,000 babies.

Dr. Minnis is the Member of Parliament for the Killarney Constituency in New Providence and leader of the Free National Movement, the Governing Party.

He was born on April 16, 1954 in humble beginnings in Bain Town to Rosalie North, a struggling seamstress, and Randolph (R.J.) Minnis, the proprietor of well-known Minnis Service Station on Market Street.

He attended the University of Minnesota, USA from 1971 – 1975 and graduated with a Bachelor’s Degree with a concentration in Biology. That same year, he entered the Faculty of Medical Sciences at the University of the West Indies, Mona, Jamaica, where he obtained the MBBS degree in medicine.

After obtaining his Doctor of Medicine degree from the University of the West Indies and MRCOG from London in 1985, he returned home and began working as a physician at the Princess Margaret Hospital where he served as a Consultant and Head of Department of Obstetrics and Gynaecology, and also as Deputy Chief of Staff.

He has a special interest and dedication to the promotion of Bahamian ownership in the economy and for the redevelopment of traditional Over-the-Hill communities.

Prime Minister Minnis was first elected to Parliament in May 2007 for the Killarney Constituency and was appointed to the cabinet as Minister of Health serving from 2007 – 2012. He was re-elected in the 2012 General Election and became Leader of the FNM and Leader of Her Majesty’s Loyal Opposition in the House of Assembly.

At the FNM’s Convention in November 2014, he was re-elected Leader of the FNM Party. In December 2016, he ceased to be the Leader of the Opposition, but maintained his position as FNM Party Leader.

And, following the General Election of May 10, 2017, Dr. Minnis became Prime Minister when the FNM won an overwhelming majority capturing 35 of the 39 elected seats in the House of Assembly. Then on May 12, 2017 Dr. Minnis was sworn in by the Governor General Her Excellency Dame Marguerite Pindling as the fourth Prime Minister of The Commonwealth of The Bahamas.

Prime Minister Minnis is no stranger to participating in the nation’s premier cultural event, Junkanoo. An avid and expert cowbeller for the celebrated Junkanoo group the Saxons Superstars, he enjoys rushing in the Boxing Day and New Year’s Day parades. His other interests include reading, working out at the gym and spending time with his family.

A Roman Catholic, Dr. Minnis is married to Patricia Minnis (nee Beneby) and is the father of three children and five grandchildren. 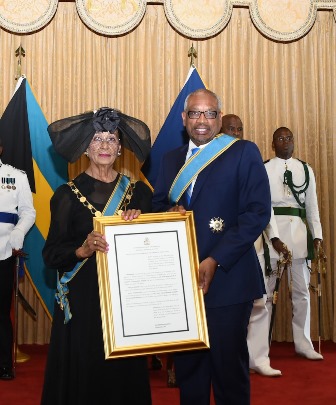 Prime Minister, Dr. the Most Hon. Hubert A. Minnis, being invested with The Order of the Nation by Her Excellency the Most Hon. Dame Marguerite Pindling, Governor General and Chancellor of the Societies of Honour, at the Commonwealth of The Bahamas Investiture of National Honours 2018 Ceremony at Government House, October 8, 2018.   Prime Minister Minnis is also pictured with Mrs. Patricia Minnis arriving at the ceremonies, and immediately after the Investiture. (BIS Photos/Yontalay Bowe) 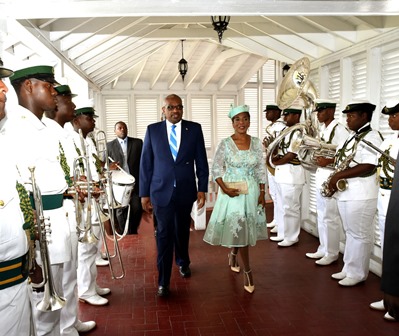 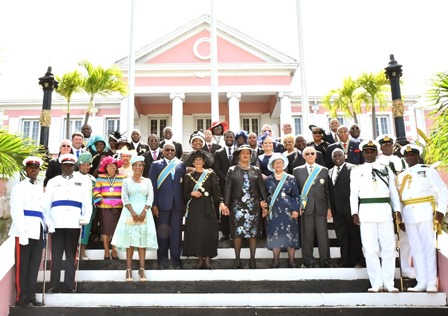 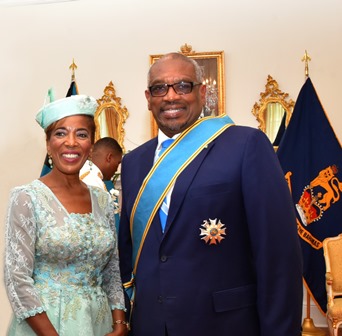