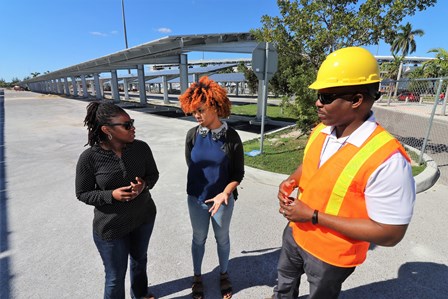 NASSAU, The Bahamas -- As the solar car park project is slated to be officially opened on March 18, 2019, Senior Environmental Officer with the Ministry of the Environment and Housing, Dr. Rhianna Neely-Murphy gave insight on the project, during a recent site visit of the 900-kilowatt solar car park at the Thomas A. Robinson National Stadium.

Dr. Neely-Murphy noted that the project was the result of a Memorandum of Understanding between the Governments of the United Arab Emirates and The Bahamas in 2017.

“We are happy to have this as a display piece to awaken the minds of Bahamians, with respect to what can happen in their individual lives; and what could happen for us as a country, with respect to renewable energy and diversifying how we ‘flip our switches’,” she said.

Dr. Neely-Murphy noted that, as an Environmental Scientist and as a Bahamian, the sensibility of using solar power in the nation is apparent, especially when costs in the long term are considered.

Environmental Officer, Lyndee Bowe reiterated the importance of renewable energy for The Bahamas and noted that the Solar Car Park project had the significance of being a pilot project that could enable similar projects to be continued throughout the archipelago.

“We intend to roll out a number of solar initiatives this year; and this is just the first of many,” she said.

Project Coordinator at the National Stadium, Scott Ferguson pointed out that the stadium was directly affected by the projected as a beneficiary and noted talks that were ongoing at that time. He added that as a Bahamian he was “tremendously excited” about such a solar project.

“The facility, itself, will benefit a lot of the Bahamian public in terms of the power driving into the grid,” he said. “Each home consumes about 2.4 kilowatts of power. This facility is 900 kilowatts of power; so we are looking at about 600 homes being able to benefit from some of this power.

“It is one of the first prototypes that we see in the country, and we hope to see more.”

Senior Project Manager with Cavalier Construction Robert Hall noted that from an industry viewpoint, the project is good because it allowed the utilization of their skills in their trade.

“The work, from our point of view, was excavation, reinforced concrete, structural steel work and fixing solar panels,” Mr. Hall said. “It is good because of the utilization of labour … and the labour was all Bahamian.”

He noted that it was a three-month projected that incorporated an approximately 30-member work force. He added that he thought that a solar project such as that one was a “brilliant” idea for The Bahamas.

“I think that the Family Islands would benefit with this an awful lot,” Mr. Hall said. “There is an outlay to it, to put it in place; but it is the natural resources – you have the sun, you have plenty of sun. I think that it is a great idea, to be honest.” 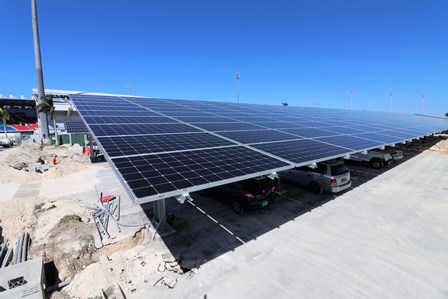