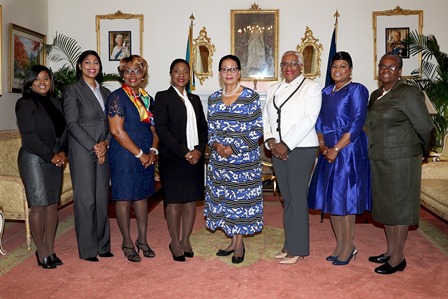 The women, led by CWP Chairperson, the Hon. Lanisha Rolle, Minister of Social Services and Urban Renewal, exchanged courtesies with the Governor General .

The purpose of the visit was to introduce the Association to the Governor-General and seek her guidance.

CWP is designed to bring female parliamentarians together in the lower and upper chambers together to work towards common goals, including being mentors to other women who would like to enter the political and leadership arena.

“We are there to be an example, source of strength and support, and guide to those that will follow.

“There are 12 females making up only about 12 percent of Parliament. We realize that is small so there is work to do. We are seeking to work together, even though numbers are small, to increase that number so there is a better balance or representation in the female gender in both houses. In the Senate there are more females than males appointed and it brings a better balance for us,” said Minister Rolle.

Among the immediate plans for CWP is a meeting with Prime Minister Hubert Minnis and the Cabinet and to hear their views on the role that women should in order to put a cohesive plan together that works for the Bahamian people.

During the visit the Governor-General emphasized that CWP has a very important role which must be taken seriously and the women must work together.

“She encouraged us not to forget our past, how we helped in Majority Rule, how women had to struggle and be homemakers, and yet be a part of the leadership work. She encouraged us to remember that we wear so many hats; to be strong, beautiful; and, support our country.

“The time we shared is etched in our memories,” added Minister Rolle.

The CWP was founded by women delegates at the 1989 plenary Commonwealth Parliamentarians Association conference so women, at future conferences, could discuss ways to increase female representation in Parliament and work towards the mainstreaming of gender considerations in all CPA activities and programmes.